Changes to the tax brackets could mean you should file a new W-4 to adjust payroll. If your tax rate is decreasing, consider changing your withholdings so that you can get more of your money throughout the year. Therefore, if you’ve got debt, use the extra monthly funds in your paycheck to pay it down and save on interest payments.

The 529 tax-advantaged college-savings vehicle — whose earnings are free from federal and, often, state taxes — also underwent a change. Money in these accounts under the old tax rules could only be used for qualified higher-education expenses.

Starting next year, account holders can use 529 funds — up to $10,000 a year — to pay for tuition for elementary or secondary public, private or religious school.

But you shouldn’t just look at the tax benefits of using this money. Consider the consequences of pulling money out of a 529 account for K-12 education expenses. Will this decision drastically deplete the account, leaving your child substantially short of the cash needed for college?

The expansion is geared for the 10 percent of families who send their children to private schools.

However, homeschooling was struck from the bill, according to The Wall Street Journal.

3. Tax Breaks for the Sickly has been favored.

Taxpayers who have had large out-of-pocket medical expenses may be able to get a tax break. The bill lowers the threshold for deducting those expenses to 7.5 percent of adjusted gross income, compared with 10 percent previously. Adjusted gross income reflects income after deductions.

4. Divorcing, OH NO! Alimony Payments are NOW favoring the Receiver.

The new tax bill will make a big difference to married couples who are calling it quits. The Republican plan is getting rid of a 75-year-old tax deduction for alimony payments, although it won’t impact couples who divorce or separate before 2019.

The longstanding tax treatment of alimony had allowed the spouse paying it to deduct it, while the spouse who received the money had to pay taxes on it.

The GOP tax bill is reversing that, giving the tax break to the ex-spouse who receives alimony. About 243,000 people receive alimony, and the vast majority are women, according to Census figures.

5. Farmers & Growers can Save by Replanting.

Tax breaks for tax prep, unreimbursed employee expenses and job hunting expenses. (Under current tax law, the total of these expenses must exceed 2 percent of your adjusted gross income to be deductible.

You still have the option to prepay the anticipated 2018 fees for your tax preparer.

7. Drinkers Depend on Manufacturers and Yes they even deserve Tax Breaks.

The people who make the hard stuff are getting breaks in the tax bill. These creators of alcoholic drinks are the beneficiaries of the Craft Beverage Modernization and Tax Reform Act, which is part of the bill.

The tax break also includes sparkling wine, which the Wine Institute said was the first time the bubbly drink qualified for a credit that lowers the excise tax.

8. Will Charities Suffer? A GIVER WILL ALWAYS GIVE!

The deduction for charitable contributions is unchanged in the tax overhaul. But you’ll still need to itemize to claim it, and that’s a much higher bar due to increase in the Standard Deduction.

9. Property Taxes, find out how to still Benefit.

To prepay your property taxes for 2018. Check with your local property tax collector’s office to see what your municipality will allow.

Some will benefit by taking the increase in the Standard Deduction and won’t have to itemize and worry with the $10,000 limit.

Mortgage Interest is what you pay for when buying a home, that can later be deducted upon filing taxes.

11. Are You in Business for Yourself?

Gig economy workers like Uber drivers and freelancers will benefit under the tax plan’s treatment of pass-through income. The tax bill provides a 20 percent deduction to pass-through businesses, many of which are small businesses like landscapers and Uber drivers.

Under previous law, that income was taxed at the personal income rate. But with Republicans lowering the corporate tax rate to 21 percent, that left a big gap between what big businesses would pay versus independent contractors or small business, given the top individual tax bracket will be 37 percent. 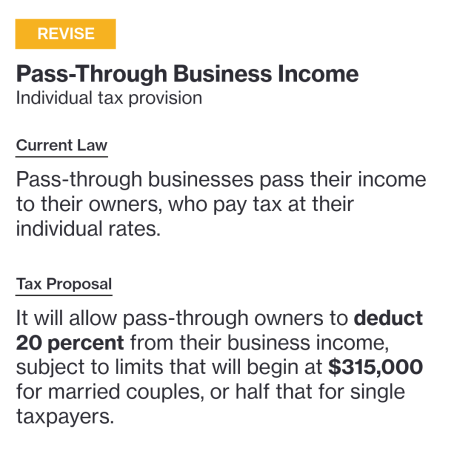 12.Higher Child Tax Credits for the Usual but The love is Spreading to the Higher Earners also. All Kids Lives Matter!!! 🙂 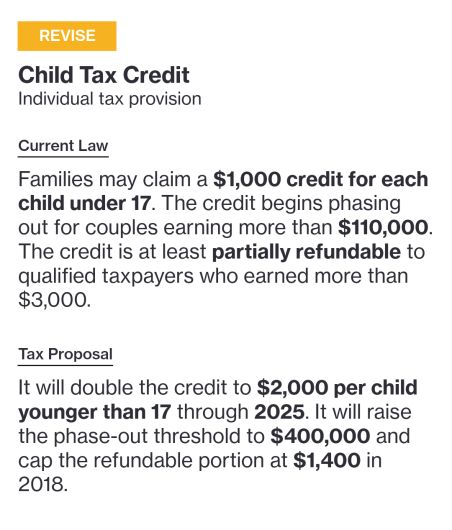 Are these Changes Forever?